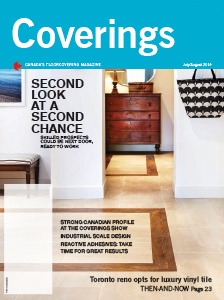 MOTIVATED WORKERS MAY BE WAITING NEXT DOOR

These social misfits can be found in communities across Canada: recovering drug and alcohol addicts in rehab facilities, the mentally ill in institutions, the physically disabled in your neighbour’s house, or even the reformed criminal in a local halfway house. They might not be your first choice for hired help, but they’re often motivated, trained, and desperately looking for acceptance — and work.

Some of you might never dream of hiring a former prisoner, for example. That he or she lives in a halfway house, where participants make the transition from jail or addition to life on the outside, is often enough to scare away most members of the community, as well as employers. However, even former inmates aren’t necessarily a threat, and giving them jobs might not only be the best thing for them, but for floorcovering employers across Canada.

Stacey Dort is director of community corrections for Shelter Nova Scotia in Halifax, N.S. What correctional-sector workers such as Dort are very quick to point out is that a worker hired from a halfway house, or other correctional facility, undergoes far more scrutiny than someone hired from the street. According to Dort, “What people don’t realize is that participants in our programs receive extensive rehabilitation and screening. You know exactly what you’re getting with our people. They are ready to work and be productive.”

The purpose of a halfway house is to reintegrate former prisoners or addicts into the outside world. To that end, such facilities provide participants with extensive skills training, addictions or mental-health therapy, and any other necessary counselling. Our tax dollars are being used to prepare these people for life in the community. Yet too few people are willing to reap the benefits of such investments.

The fear factor, so to speak, remains formidable. Potential employers are afraid that a hire from a halfway house is prone to theft, violence or other criminal acts. Dort is adamant that the process is set up to succeed. The last thing anyone wants is for incidents to occur, and to have these programs fail.

According to Dort, “We go to great lengths to ensure that the right people are hired for the right employer. We screen, and we match. We even screen the employer, in a sense, to make sure he or she is ready to hire someone in our program. We do regular checks. Participants have to regularly check in. But none of this interferes with the job. It’s as though they’re just like any other worker.”

As unconventional as some of these pools of labour might seem, the reality is that the status quo is currently not working. All levels of government and educational institutions have tried more traditional solutions to fill the so-called skills gap. Money goes to schools, apprenticeships, and so on, but job openings in floor shops across Canada still go unfilled.

Also in the news recently is the ongoing controversy surrounding the temporary foreign workers program. In fact, governments at all levels are trying to attract more foreign workers, and that includes Canada’s flooring sector. Floorcovering installers and flooring-installer assistants have been specifically recognized as high-demand occupations for the federal Temporary Foreign Workers Program. In the province of Alberta, for example, the market is specifically looking for flooring installers from overseas.

According to a recent report released by the Ontario Construction Secretariat, the outlook for the construction industry is very positive, but with it comes an acute shortage in skilled labour. Flooring installers were specifically cited as tradespeople in need of workers. As a result, contractors across the board — almost 60 percent of those surveyed — indicated a willingness to hire more apprentices and tradespeople. Perhaps alternative sources of labour, such as recovering addicts and the disabled, could help fill in the gap.

This so-called skills gap is not a new problem in Canada’s floorcovering sector. In fact, it’s a state of affairs that, as a sector, we might have to come to terms with. Let’s face it. Being an installer, for example, involves thankless hours of getting on one’s knees, cutting and hammering flooring product, inhaling dust and dirty air, and not getting much appreciation for it, either. People are not exactly lining up to work in Canada’s flooring sector. If that’s the case, then other solutions might be necessary.

Those other solutions might include people looking at a second chance at life. Instead of waiting for the fresh-faced flooring-apprentice graduate that would rather design video games for a living, why not the reformed drug addict that will sweep the floors without a second thought? Instead of having to tap a foreign-worker program for skilled work, why not a Canadian from a correctional program that’s already been trained for the job?

Chris Fyles is executive director of LakeCity Woodworkers in Dartmouth, N.S. The organization serves as a partially government-funded social agency that actually puts the mentally ill to work in skilled jobs.  For Fyles, there is a stigma surrounding the hiring of certain people within society, but that stigma works both ways. “So, on the one hand, there are employers out there that are prejudiced, for lack of a better term,” he says. “However, the stigma often exists on the inside of those with mental illness and others. They often think they’re not wanted, or not good enough. Our program proves otherwise.”

The LakeCity program is not the only employer to utilize an untapped pool of labour. Fyles points to a progressive employer in Toronto, Ont., that serves as an inspiration. Fyles says, “Mark Wafer owns a number of Tim Hortons franchises, and he makes it a point to hire people with disabilities. So, it’s not just about being a good person, it’s about being a good business, too.”

According to statistics, anywhere from half to two-thirds of people with disabilities in Canada are unemployed. Yet, as with reformed prisoners and people with mental illness, there are advantages to hiring the disabled. Compared to the rest of the population, they are more likely to have skills training, their disabilities often force them to solve problems creatively, and they are motivated. That’s not always the case with an average graduate from college or university.

According to Dort, sometimes the problem is simply one of matching willing employers with capable workers. “It’s been our experience that there are companies out there that want to help. In my opinion, there aren’t enough of them, but they’re there,” she says. “Sometimes all they need is to be pointed in the right direction; to take that first step into the unknown.”

Dort says one of those first steps might be with CORCAN, a rehabilitation program provided by the Canadian government that provides partnerships with businesses to train and employ prisoners and those released from prisons. The organization produces a catalogue of goods manufactured with the help of its participants. Offerings include various forms of construction services, including the building and installation of commercial-grade floors and wall finishes.

For Fyles, it’s real simple. He says, “Find a local association, institution — whatever — and just start talking with them. Develop relationships. Get your questions answered. The fact is that, if you want help, you can get it, and it’s not real hard.”

Clarissa Johnson is manager for the Edmonton John Howard Society, an organization that manages halfway houses and at-risk youth in Edmonton, Alta. For Johnson, the stigma associated with hiring people from alternative labour pools is strong, as is just about most attitudes towards the people in her organization’s programs.

“That’s why we go to great lengths to be as open with the community as we can be. Anybody who wants to visit us can do so. We have absolutely nothing to hide,” Johnson says. “There is a lot of misinformation about what halfway houses are about, and who lives in them, for example. It’s our job to reintegrate people into society, and that’s what our participants want, too. Ideally, is should be a win-win for all.”

Jobs should be a win-win for both the employer, who needs skilled help, and the employee, who wants to make a productive living. Yet, right now, this isn’t happening enough in Canada’s floorcovering sector. To be more productive, floor shops have to look elsewhere for solutions. Even if it’s not the first place you would think of, these alternative pools of labour still might be the right place to hire help — for everyone involved.

What is your ID?

Employer Responsibilities during the Pandemic

How to Create an Unforgettable Customer Experience

Ten of the Most Common Myths about Mixing Grout