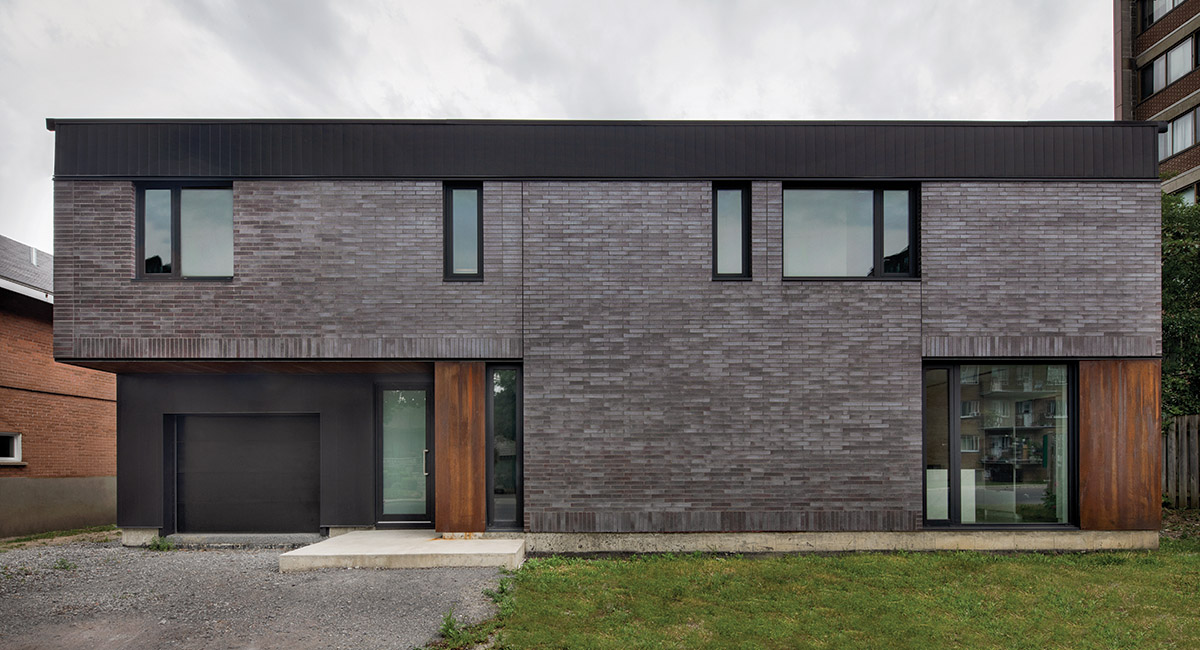 Located in the town of Côte Saint-Luc, Que., this King-Edward Street residence is seated on a ‘rue’ where split-level typology abounds, typical of 1950s homes when the street was developed.

The original residence that stood on this site had been ravaged by fire. Its owners, a young couple, had chosen it from several others because it met their programmatic needs and their preferred layout.

Mandated to replace it, Atelier Schwimmer, a Montreal-based design and architectural firm, proposed a new form rooted both in a reinterpretation of the split-level typology while reconsidering the house insertion to the lot.

Design principal Felix Schwimmer, along with Atelier Schwimmer associates, Georgia Cardosi and Francesca Fiaschi, tackled the challenge of a property that was so destroyed, even the foundation was compromised.

“Because the fire was in the basement, the structural engineer decided it was better to just start from scratch,” says Schwimmer. “In the 1950s, not every contractor prepared good concrete.”

The back-split orientation has the ground floor as you enter the home for grown-up spaces and the basement for the children, says Schwimmer.

The concrete slab floors were handled by an expert who has developed a technique that creates “a really nice polish,” says Schwimmer. The process involves smoothing the surface twice when it is wet and three times when dry to provide a matte finish. The concrete floors are also insulated and heated for consistent comfort across the two levels.

Upstairs living quarters are wall-to-wall cherry wood chosen by Atelier Schwimmer to provide a warm contrast to all the concrete.

The homeowners selected the bathroom tiles. The new house is made of rectangular boxes stacked in a way to create a large accommodating backyard, in opposition to the previous house — a cube in the middle of the lot that hindered the side courts and resulted in a small backyard. Viewed from above, those new boxes make a U-shape house shielding from the southern neighbour, a 10-storey brutalist-style building.

The black, metal-cladded garage box is recessed from the front facade, creating a loggia entrance; it sits perpendicular to the street. The day room box is thinner than the second floor, parallel to the street and open to the backyard. Above the night box overhangs the lower floor and holds the bedrooms. These principal boxes are cladded with ash berry velour brick, forming a T-shape front facade. Finally, inside the vertical black steel-cladded box, a den and family room sit on split-levels.

Inside, steel cladded walls accentuate threshold spaces, which are the entrance and vertical connection in-between floors. As you enter the house, you’re greeted by views toward the backyard; a few steps in the house lets the day room appear, as if the warm orange steel wall protects access. This transition is repeated where the staircase climbs into a vertical void capped by a skylight. Both the structure of the staircase and the wall are made of steel — these central elements endow the residence a grand space with its 30-feet interior wall and void.

Schwimmer says the owners had very bad luck with contractors during the 18-month construction project, including with the foundation, HVAC and exterior.

“It was one thing on top of another,” he says. “They re-did the front brick three times, including once after an acid burned the surface of the brick.”

The topper was that six months after moving in, the couple divorced.

“Everything was perfectly done in the end,” says Schwimmer. “Sometimes life is unlucky.”

Vinyl Floors: What’s Next for the In-Demand Material