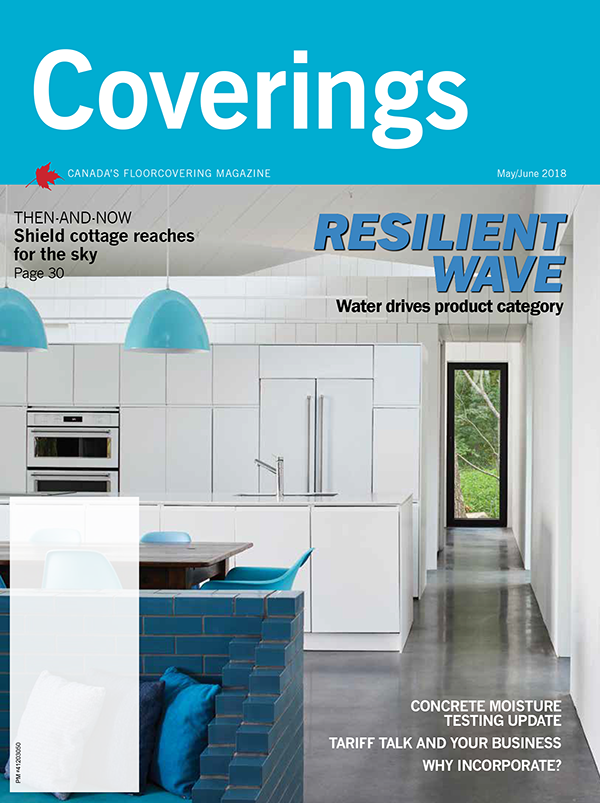 Product categories in the flooring industry are always jockeying for position in the marketplace, but there is no argument that resilient has made a tremendous splash over the last several years. 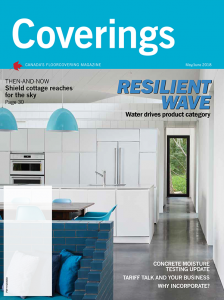 A WATER METAPHOR makes sense, too, as residential and commercial clients have embraced the flooring in applications where wet conditions can do tremendous damage.

“The growth started happening in the past four years when the vinyl planks started to appear,” says Mike Ghazarian, regional manager of Hamilton, Ont.-based Alexanian Carpet and Flooring. Ghazarian is responsible for 19 locations of the flooring retailer across Ontario.

“It’s growing about 10 to 15 percent every year for us. They first started as glue down planks and now they have the click system,” he says.

Ghazarian notes that resilient flooring started in basements and is now being used in the living rooms, bedrooms and kitchens. “That is why it is becoming more popular — the newer styles are very realistic and look like wood. More and more people are doing it in upper levels too, but still number one is basements.”

He explains that even condominiums are using it, due in part because installers were limited to where they could cut the wood or laminate. “With the new product you just snap it in place,” Ghazarian says.

According to Jack Pilcher, owner of Canuck Flooring in Burlington, Ont., and board member of the Canadian Flooring, Cleaning and Restoration Association based in Georgetown, Ont., there have been huge changes to the product since he first began installing resilient floors in the 1970s when vinyl asbestos tiles were still being sold. Pilcher’s six-year-old commercial flooring business has five installers on staff.

Pilcher likes his commercial niche over the highly competitive residential business. “There’s no money in residential — too many guys running around doing it for half the price.”

Sheet goods, including linoleum, account for 30 percent of the sales at Canuck Flooring. In the commercial world of hospitals and schools the biggest competition for resilient flooring is ceramic tile and terrazzo, according to Pilcher.

“In hospital rooms,” says Pilcher, “resilient has more of a quieter, residential feel as opposed to a tile or terrazzo floor.” He observes that resilient sheets are growing in areas such as corridors, washrooms and other areas.

“The product is a more maintenance-free in contrast to your typical wood flooring lunchroom. You don’t have to worry about the scratching as much.”

Fred Richardson, co-owner and president Cutting Edge Contract Flooring in Edmonton, Alta., and member of Parker, Colo.- based Fuse Commercial Flooring Alliance, believes in resilient flooring, but thinks it was cleverly marketed to supplant carpet. His operation has 13 office staff, 12 in-house labour staff and works with variety of local contractors.

“I think the carpet industry lost a lot of ground very quickly over that claim that resilient floors are better for allergies,” says Richardson. “If you put a resilient floor down, sure you don’t have any allergens trapped. But they are all back in the air when you walk through a room. Whereas in carpet, all of the allergens get trapped in the carpet and you vacuum them out.”

Shane Lewis, general manager, Town & Country Floor Design in Abbotsford, B.C., and education committee board member at the Dalton, Ga.-based World Floor Covering Association, has seen a 12 percent sales increase at his store in vinyl plank and vinyl WPC (wood product core) from 2016 to 2017. But what the vinyl product is replacing is one thing everybody seems to agree on.

“I would have to say that there is a shift out of laminate mostly. A shift from carpet and hardwood, too, but very small,” says Lewis.

“I would say consumers see the waterproof feature as a big plus since they are able to put it in basements and not worry about their potted plants, fridge or dishwasher leaking.”

The technological evolution of the resilient category is another factor driving its broad acceptance in the marketplace, according to Lewis. “With the vinyl plank and the resurgence of the WPCs and the different locking systems with the waterproof cores, the manufacturers are making it easy for consumers to install directly.

“As an example, a couple of years ago they were selling the vinyl planks with full glue down and the vinyl system with the locking system built right into it. Now the WPC has made the tongues a lot stronger with less expansion and contraction happening. It has become more problem free.”

Richardson sees resilient as having grown into a more complex category. “There have been different incarnations of LVT. They had LVT, then LVT click which didn’t do so well. They have loose lay now and the WPC, the rigid core and the multilayer. So, there are just so many incarnations now of LVT that it’s become much more than a single product category.

“The WPCs and the multilayers are replacing laminate to a great extent. They are a good solution for where there is high moisture content.”

Pilcher cautions, “usually in a watery area we wouldn’t use an LVT. Sheets can go up the wall to make it waterproof. With a vinyl plank, if there was water under there, it would just explode off the floor.”

Canuck Flooring also relies on linoleum resilient flooring when green building projects comes up, both for environmental and appearance reasons. “Linoleums look nice in the right setting when they are installed correctly — which is the main thing. It’s made from cork, linseed oil and wood chips. A lot of companies and architects are going that way because its environmentally friendly.”

As an all-natural product, linoleum is eligible for gold and platinum LEED certification ratings. Lewis observes that “all of the companies who had the first generation LVT products are getting out of it because of the failing of the tongue.”

He says that the latest generation, however, “has been a great market for us and our complaint ratio is insignificant. I had one complaint recently where the customer had buckling. They just had some guy that they knew install it and he didn’t allow for expansion or contraction.

“That is a self-install. We do recommend that we install for customers.”

Town & Country will continue to grow its LVT business but in smaller amounts, such as into apartments and commercial townhomes, according to Lewis.

According to Ghazarian, the laminate category is shrinking because of vinyl flooring, but without encroaching on carpet as much. “A lot of people still like to have that soft feel in their bedrooms,” he says.

Certainly, laminate producers want to keep up with their vinyl competitors. “Manufacturers are now introducing waterproof laminates,” says Ghazarian. “They want to bring their category up again.

“It is a product that is do-it-yourself, so consumers can install it themselves because it is easy to cut and maneuver around door frames and baseboards.”

Even with their good wear layer properties, traditional laminates can’t take water of any kind, according to Lewis. “In the last year we’ve seen laminate products introduced with waterproof cores. They are just hitting the market this year. That could slow down the growth of the vinyl.”

Lewis concludes, “as salespeople we do like the performance of laminate. We just didn’t like the moisture problems.”

The Important Role of Flooring Design in Wayfinding

Overcoming the Most Common Obstacles of E-Commerce