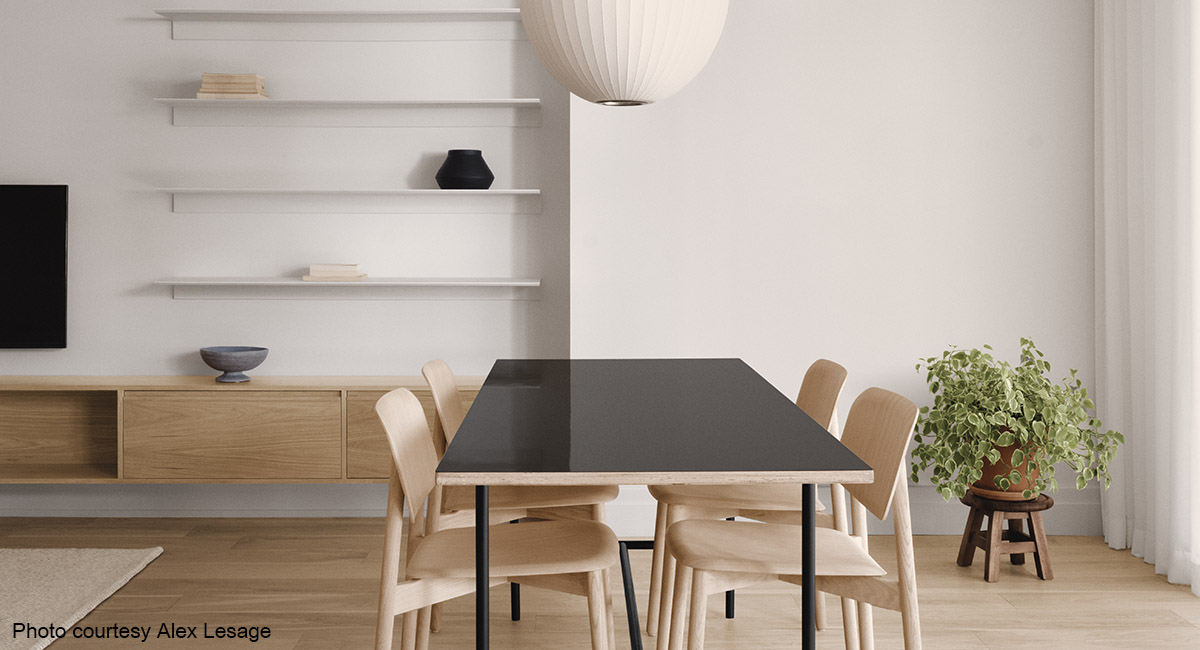 Located on Saint-Gerard Street in Montreal is a 1935-built building, one of three formerly owned by cousins as part of a real estate project. The duplex was recently sold to new owners who wanted to update the ground floor. The rooms of the residence, nicknamed La Maison Rose by neighbours for its uniquely coloured front door, were organized around a central corridor, characteristic of several dwellings in the Villeray district. The goal of the renovation was to create an open concept layout for the kitchen, dining and living areas in order to accentuate the views and improve access between rooms. The new homeowners also wanted to open up the living space to the courtyard at the back of the house.

Reorganization of the space resulted in the creation of two bedrooms at the front of the house, one of which is designed as a master suite with a walk-through closet and bathroom. The vestibule was slightly enlarged with the aim of improving fluidity of movement. The kitchen, dining and living areas are located at the back of the house. The main bathroom was relocated, allowing the rear façade to be opened up. This maximizes the entry of natural light into the main living space. French doors and large paned windows add to this now chic, sophisticated space.

While the homeowners took great care to remove each door and wooden frame in order to reuse these architectural elements in the redesign, none of the existing flooring was retained. Instead, wide plank white oak was chosen for the entire space, with the exception of the entryway and bathrooms. The wood specifically selected is knotless to create a uniform look throughout. The juxtaposition of the original wood doors/frames and newly laid white oak floors creates an interesting aesthetic that melds two different periods in time.

Unable to preserve the ceramic floor in the main entrance, the designers replicated the mosaic tile pattern, imbuing a classic style in the updated vestibule. This was achieved by drawing out the original pattern to ensure authenticity.

In the main bathroom, a large-format beige tile was chosen to give the impression of a one-piece concrete slab. The small grout joints, measuring just one-sixteenth of an inch, and tone-on-tone grout colour further achieve this effect.

Lysanne St-Laurent and Laurence Ouimet Vives are co-founders of Vives St-Laurent. Established in 2018, the Montreal design studio creates timeless residential and commercial spaces, where lines are straight and geometric, and textures evoke both what is to come and what has passed. Lysanne and Laurence can be reached at [email protected] and [email protected], respectively.