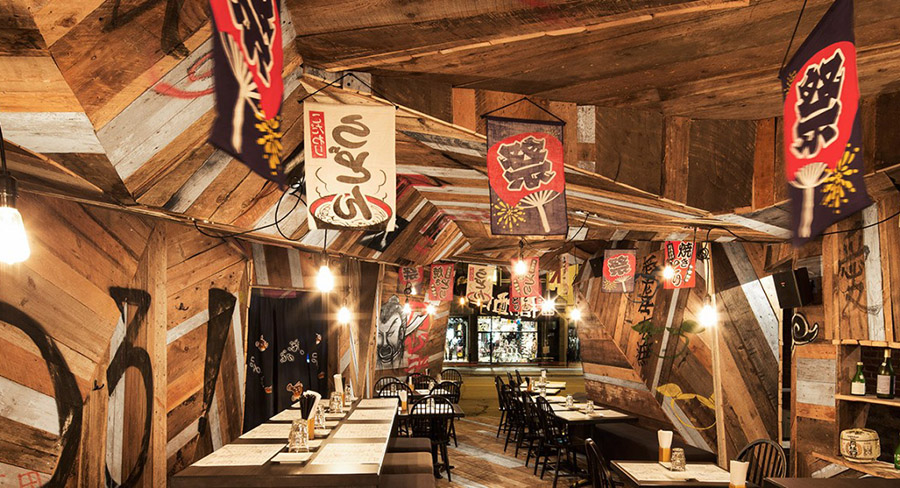 For the new Kinoya Izakaya pub restaurant, Jean de Lessard Designers Créatifs chose to explore the orthogonality and verticality of the space. The morphology of the narrow two-story premises located on Bishop Street in Montreal lends itself perfectly to it.

Principal designer Jean de Lessard wasn’t given a big budget, so he imaginatively played with the interior’s volume and re-used or sourced inexpensive materials. His firm had worked with the client several times in the past, including the same Kinoya restaurant in 2015, so de Lessard had a good rapport.

“We kind of brought back some ideas that we used there (while introducing new ones),” he says.

If the function and aesthetics are in line with the first Kinoya, this time the tunnel effect is amplified, on the ground floor and first floor, thanks to the assembly of polygons that are partially concealing the original masonry that was preserved for its rough appearance and the sake of material economy.

Encroaching on the circulation axes, the wooden geometries dictate a zigzag path along which basic furniture and platforms are organized. Furthermore, they unfurl in the remodelled kitchen on the ground floor and around the bar counter upstairs, forming nooks and crannies that seem to confine the diners while the alternation of materials of different opacity offers entertaining points of view.

The key element of the project is an imposing scaffolding of made-to-order metal grids. This stalagmite painted in yellow that rises to the top of the floor hides the staircase from view. Its unrefined workmanship enhances the ‘rough’ plasticity typical of an izakaya (a Japanese bar with inexpensive meals).

According to de Lessard, the complicated metal grid structure design was output on a 3-D printer to verify its setting in the space before sending detail drawings to a metal fabricator.

“They built it in the shop and installed it later,” he says.

The 50,000 stickers that adorn the structure add a dynamic irreverent note — one that befits a shabby café at the end of a dark alleyway.

“The project probably took around four months,” says de Lessard, noting the pandemic hit along the way. “He would have loved to open but he was happy with the feeling.”

Partially hidden from the street, the restaurant faces a natural challenge to attracting customers, many of whom are of Asian descent from the downtown area. But when De Lessard went with some friends one night since the renovation, the place was jam-packed.

“Like every restaurant, it has to be open for some months before people know the space and then they go there,” he says. “It is a good meal, so the restaurant will probably survive the pandemic. It is a weird time of the year or even the century.”