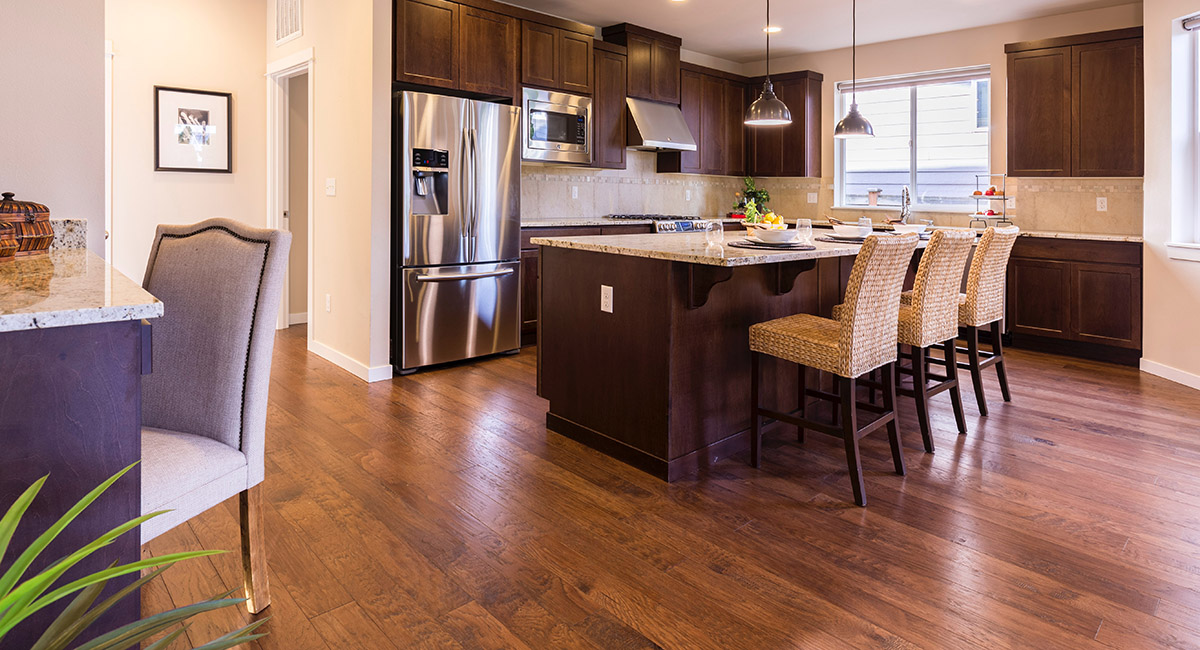 Thankfully, all squeaks can be eliminated. It is a matter of determining the source of the squeak and then taking corrective action to eliminate the cause.

So, what are the culprits?

Here are seven potential reasons for a squeaky wood floor.

Improper Subfloor or Underlayment Spacing
Floor panels expand slightly when installed over a substrate with a higher moisture content like concrete. If no allowances have been made for spacing of joints, there can be enough movement to cause the underlayment to buckle, pulling the fastener loose. This is especially true when improper fasteners are used or the correct fastening pattern is not followed. Once the moisture content lowers, the wood will shrink. The result is a loose panel that is free to move up and down on the shank of the fastener.

Inaccurate Fastening Technique
Power nailing has become increasingly popular with ‘fast track’ building techniques. But when using a pneumatic nailer, it is impossible to tell when a nail has just missed the edge of the joist, allowing the shank of the nail to rub the edge of it.

Lack of (or Incorrect) Blocking
The blocking of joists is normally done prior to installation of the subfloor. The norm is to nail the blocking from the top. Then, after the structure is enclosed, the bottom of the blocking is securely fastened. Unfortunately, many installers are skipping this crucial step, either not blocking at all or failing to secure on the bottom. This allows the floor joist, when subjected to a bearing load, to rotate or slide rather than transferring the load to the other joist.

Improper Fastening of Interior Wall Partitions
If there is a squeak near an interior wall partition, it may be a result of the wall plate being anchored to the subfloor rather than to the floor joist. Occasionally, carpenters will nail the lower plate into the subfloor, which will deflect slightly when walked on. This allows the subfloor to move and rub on the shank of the nail.

Wrong Nails
The use of fasteners that are not designed for flooring, such as smooth shanked or coated nails, are a major cause of squeaks. When lumber dries there is shrinkage, which is not limited to just the outside dimensions of the wood. There is a direct correlation between the shrinkage and the hold of the nail.

Uneven Joists
The flooring industry is seeing much more movement to the joists with the use of lower grades of dimensional lumber, high yield growth lumber and higher moisture content in lumber. This movement is a result of the lumber drying to its in-service moisture content, resulting in shrinkage, twisting and bowing. When floor joists are installed, they are supposed to be ‘crowned’ upward. If the joists are not ‘crowned’ or are placed randomly, the subfloor will be forced to bridge the high and low joists. This creates gaps between the subfloor and the low joists, generating a squeak between the movement of the subfloor and the low joist.

Ductwork Vibrations
In structures with forced air heating systems, ductwork usually runs between the joists and comes up through the floor where the discharge vent is located. Squeaks occur when the discharge vent is cut too tight to the ductwork, as it allows the deflection of the substrate to rub on the metal.

Shahab Sarrami is the owner of Canadian Flooring & Renovations. Established in the early 2000s, the Vancouver-based company has grown from a home flooring supply store to also include home and condominium renovation services offered by its skilled flooring contractors.

The Best Flooring Solutions for a Home Gym