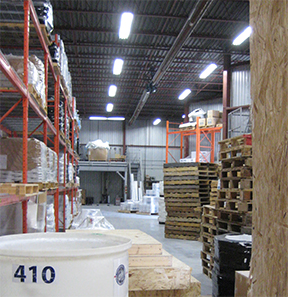 “Canada is becoming the biggest warehouse in the world,” says Chuck Leon, consultant for Ontario-based Workplace Safety and Prevention Services. “Every plant and retail outlet has a bit of a warehouse out in the back.” This includes flooring retail outlets across Canada. Yet the topic of health and safety has not often been discussed for warehouse areas — a situation that is changing rapidly.

For example, the Ministry of Labour in Ontario is currently conducting what it calls a warehouse safety blitz across the province, and flooring retail outlets are not immune. This is not the only province that is raising awareness on this topic. In British Columbia, WorkSafeBC has made various resources available, including hazard alerts and other informational tools. Warehouse safety is becoming a national concern.

It wasn’t always this way. Leon says, “When it comes to health and safety, manufacturing has always been a focus, but warehouses not so much. Sure, there was always an emphasis on slips, trips and falls, and on lift-truck safety because of a number of fatalities there, but other important areas of warehouse safety often get overlooked.”

An example of a fatality involving a forklift occurred in 2008 at Direct Distribution Centres, a warehousing facility in Calgary, Alta. A worker using a hand-operated lift had large racks of fully-loaded pallets crash on top of him. It took emergency crew workers six hours to try to reach the body, only to find the man had already died. The incident attracted attention not only to lift safety, but also to racking as a potential hazard.

Racking systems and loading docks is where Leon’s focus has been over the years. “People don’t really think of racking systems a lot,” he says. “It’s just a piece of steel by the wall over in the corner. But things started to change in 2003 when a fatality occurred at VersaCold in Brampton, Ont.”

VersaCold is a large cold food storage company with warehousing facilities across the globe. Back in 2003, in its Brampton warehouse, several racks suddenly collapsed, followed by a roof cave-in and buckling of the wall. A worker was crushed and killed under a pile of frozen food and metal. It took emergency workers three days to dig up the body. The company was fined $240,000, and the incident has served as a seminal event in Canadian warehouse safety.

Since that time, Leon has been working tirelessly to educate companies on warehouse safety, and specifically on racking. He says, “It’s been in the retail sector where a lot of the emphasis has been. Even the smallest of warehouse spaces will have some sort of racking. That’s where the learning process needs to be, to have people inspect their systems and make sure they’re up to standard.”

Although occupational health and safety is primarily a provincial jurisdiction in Canada, these CSA standards tend to be adopted by all the provinces as the best practices available for racking and lift trucks. Leon provides a couple of examples: “In Ontario’s Occupational Health and Safety Act, it states that all equipment must be in good working order.

“So, for racking, for example, that provides a lot of leeway, and not much guidance. That’s where the CSA standards can help. In Alberta, racking is hardly mentioned in their regulations and there is no requirement for monthly rack inspections. However, in Ontario, there is a monthly requirement, plus an engineer needs to be present when a rack is being modified. Yet, in all cases, the CSA standards can probably provide the best guidance.”

Various regulations and resources on warehouse safety are provided throughout Canada. Canada’s federal safety body, the CCOHS, provides a detailed list of warehouse issues, including chemical, ergonomic (standing, lifting and pulling) and psychological (multi-tasking). Quebec regulations include ventilation requirements in the presence of combustion vehicles. Manitoba’s workplace safety and health regulation focuses on fall prevention and training while operating vehicles in warehouses.

Other areas of warehouse safety include housekeeping, conveyors and cranes. As with most issues related to occupational health and safety, the regulatory framework can be vague at best. However, as the VersaCold incident shows, the regulators will most certainly pounce if an accident does occur. This means that companies are always legally responsible for the safety of their warehouses. Yet warehouse safety should be about more than legal compliance. Ultimately, it should be about running a good business.

Lauren McFarlane is president of Act First Safety, a safety training company in Toronto, Ont. According to McFarlane, “People sometimes fall into the trap of treating safety as strictly a compliance issue, or as a logistical challenge. However, safety should very much be seen in broader terms. If you’re running a safe operation, you’re running an efficient business. In other words, you’re enhancing your bottom line.”

In fact, McFarlane often advises companies to simply disallow visitors from entering the warehouse area altogether, even if it’s just for a short walk to the washroom. Visitors aren’t trained in a company’s safety procedures, so they’re not trained to behave as a pedestrian would towards vehicles and other hazards.

The topic of personnel in a warehouse can be a very important one, especially in flooring retail where it’s not only visitors that can be at risk, but anyone that interacts with the company, especially on the loading docks. Installers often load product from the warehouse. Truckers often make deliveries on the loading dock. These interactions can be unpredictable.

McFarlane says, “You often have to deal with people in a warehouse that are complete strangers to your company. You don’t know how they will behave, or how they will interact with your own workers. Instead of just leaving it alone, these situations might actually require some supervision. If something does happen, you can be held responsible.”

The VersaCold incident was a tragic example of what can happen when things fall in a warehouse — either the rack itself, or items being stored on the rack. As already mentioned, rack inspections are important. However, as McFarlane points out, everyone working in a warehouse should always be mindful of where the racking is, what’s stored on it, and the hazards involved.

She says, “You know, I was in a warehouse not too long ago and there were workers working between the racks. This should not be happening. On top of that, that same racking ended up collapsing the next weekend. Thankfully, nobody was in the warehouse, so nobody got hurt. But what if the collapse occurred while the workers were there?”

McFarlane has two basic recommendations to avoid such situations. She says, “First, you really need to plan and organize your workstations. Obviously, workers should not be stationed near racks. Second, do not accept an inferior racking system. If it’s old and frail, get a new system. Lives could literally be depending on it.”

Planning and organizing, as well as communication, make for a safe warehouse. They also make for an overriding culture of success within any business. McFarlane says, “People shouldn’t be afraid to ask questions and to talk to one another. Hold regular safety meetings. Get things out in the open. This is how progress is made not only in safety, but in business.”

McFarlane points to one specific area of business culture and communication that can pose a risk to any company.  She says, “In general, young people — and young workers in particular — rely very heavily on the expertise and advice of their elders, and their bosses. In fact, it’s been my observation that the young can sometimes put too much trust in their older colleagues, so they don’t ask the right questions. That’s when mistakes, and accidents, can happen.”

Warehouses are about space. They are meant to store things. As businesses develop and grow, however, the amount of available space can often diminish — to the point where clutter can become a real problem. Says McFarlane, “As part of the planning process, and business planning in general, companies need to ask themselves if they have the space to store stuff. Organizing a warehouse helps. But, at some point, maybe your plans should include a bigger warehouse.”

For both Leon and McFarlane, slip-and-fall prevention is at the heart of a safe warehouse, and that’s where good housekeeping comes in. Leon says, “Maintaining a clean and orderly workplace is important in all areas of safety. Warehousing is no different.” McFarlane adds, “Keeping things neat, especially in confined spaces, is an important part of good housekeeping, and a safe warehouse.”

For many flooring retailers across Canada, the small warehouse at the back might get overlooked when it comes to safety and efficiency. However, the last thing anyone wants is for a rack to fall on top of someone. So it’s important to learn about standards, as well as engage in open communication and planning. In the process, a business becomes safer, and more prosperous.

The Best Flooring Solutions for a Home Gym

How to Select the Right Certification Program